Home > About > Our Parish 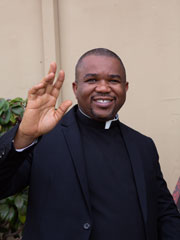 Catholic Education is a profound gift of God to humanity through the ministry of the church. Many lives have continued to be changed as evident through wonderful testimonies from families. I remembered when my family was considering switching school from public to catholic education (minor seminary) for me, one of the phrases repeated often was, “we want him to be grounded”. This simply means receiving a balanced education that includes academics, morals, and discipline.

Holy Name School enjoys a pride of place when it comes to training and forming the children of God and their families, academically, spiritually, and morally. I invite you to give a child a gift of Catholic Education especially here at Holy Name of Jesus School. Call the school today and remain blessed.

Holy Name of Jesus parish has a long and rich history. Holy Name of Jesus Parish started in 1912. It began as a very humble church, in an old frame structure located on Jefferson and Gramercy Place. In 1912, the original building, which was an old wooden structure, was pulled by a team of horse and rolling logs from across the street to the current location. A new building with a school was built in 1924. It was formally established by Bishop John J. Catwell on February 18, 1921. In 1924, the 2nd pastor Fr. Joseph Truxaw, constructed a two-story structure that would serve not only as a church-auditorium, but as a parochial school as well. One hundred and fifty students enrolled in grades one through eight when Holy Name of Jesus School opened its doors in September of that year, 1924.

Early accounts describe the new school as up-to-date and fully equipped. However, by 1960, the building no longer conformed to the City of Los Angeles’ rigid building and safety codes, so construction was begun on a new nine-classroom structure. The new building was completed in April 1961, shortly after, the old school was razed. The following year, 1962, the pastor, Fr. Patric J. Roche, completed the replacement of the original plan by adding an auditorium as well as another classroom. A kindergarten program bagan in 1983. Holy Name of Jesus School has been under the direction of a lay principal since the Sisters of Loretto withdrew from the school in June 1978. In 2002 a library was added to the school and in 2003, a music program was implemented.